Excerpt #2:
Standing, he summoned her with a hand.
“Come. Get out of the pool.”
Her mouth dropped. “I’m not getting out of here with you standing there. I’m…I’m naked.”
“Of which I’m well aware.” His voice dropped low and deep. “Come out.”
“No!”
“Then I’ll come in after you.”
He took one step. She splashed backward.
“All right!” She huffed. “Turn around.”
He shook his head, unable to keep a smile from his face. “Not on your life. I’m not letting you out of my sight.”
“You expect me to—”
“Yes. I do. Now, come out.”
She snapped her mouth shut. Flustered, her pale cheeks flushed pink. Marius was thankful for his vampire eyesight to see the pretty blush crawl up her neck. What he wouldn’t do to chase that path with his mouth.
Arabelle’s expression shifted, her brow smoothing, eyes narrowing, lips parting. She slowed her breathing and uncrossed her arms, standing with poise from the water, revealing the sensual gifts nature had given her. Marius swallowed hard, but his mouth had gone dry. Thirsty. He was so thirsty.
She moved unhurriedly through the water into the shallows, emerging like a goddess who knew her power. Marius actually stepped backward as she stood on the ledge in front of him—completely bare and utterly beautiful.
“I’m here now, Your Highness. What will you do with me?” 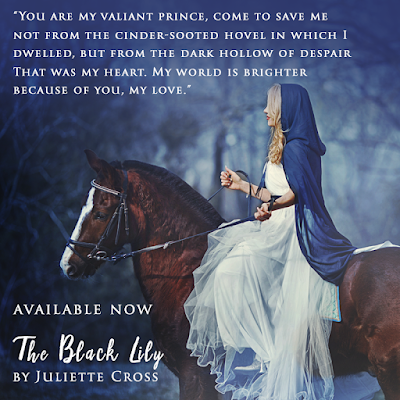 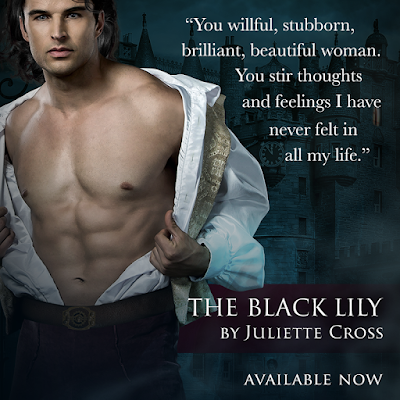 Cinderella like you’ve never seen before…
With the threat of the vampire monarchy becoming stronger every day, the Black Lily must take drastic measures. As the leader of the underground resistance, Arabelle concocts the perfect idea to gain the attention of the Glass Tower. Her plan? Attend the vampire prince’s blood ball and kill him. Fortunately for Prince Marius, her assassination goes awry, and Arabelle flees, leaving behind only her dagger. Marius is desperate to find the woman whose kiss turned into attempted murder, hunting for the mysterious assassin he can’t push out of his mind. But what he uncovers could change the course of his life forever…

Juliette is a multi-published author of paranormal and urban fantasy romance. She calls lush, moss-laden Louisiana home where she lives with her husband, four kids, and black lab named Kona. From the moment she read JANE EYRE as a teenager, she fell in love with the Gothic romance–brooding characters, mysterious settings, persevering heroines, and dark, sexy heroes. Even then, she not only longed to read more books set in Gothic worlds, she wanted to create her own.