When the opportunity arises for journalist Tally McKenzie to meet tennis ace Cash Gallagher, she grabs it without hesitation. Desperate for a killer story to advance her career, she’ll have to betray her idol and her own morals into the bargain if she is to succeed. Renowned bad boy Cash wants one thing; to remain at the top of his game. He’s fought hard to get there, and he’s not about to lose his crown, especially over a woman.

When Cash divulges personal information, Tally seizes her chance and writes an explosive article. Incensed, Cash sets out to get his revenge. Except the darling of centre court gets more than he bargained for—a passionate affair with a woman he should detest. But Cash is a man with secrets—secrets that could destroy his career. Dare he take the risk? Or is the cost too great, even for his perfect match. 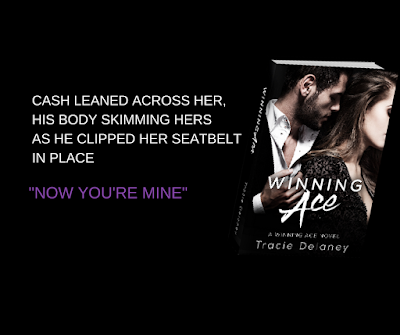 Cash stared at his feet. His Adam’s apple bobbed as he swallowed. And then he muttered, “Screw it” under his breath.
He strode across the kitchen and captured her face between his hands. His mouth crushed down on hers. This was no slow approach. Cash devoured her. He nipped at her bottom lip, and on reflex, she opened her mouth, allowing his tongue to dart inside. The kiss happened so quickly she struggled to process it. When her brain caught up, a thrill of ecstasy rushed through her. This wasn’t a dream, nor was it some fifteen-year-old girl full of hormones, pressing her lips against the centrefold of a teen magazine, hoping it would spring to life and kiss her back.
With desire surging through her body, her knees buckled, and she sank a couple of inches before a strong arm wrapped around her waist, supporting her. Just as she was about to run out of air, Cash tore his mouth away, and his lips feathered across her cheek, her ear, her neck as she gasped for breath.
“What’s happening to me?” he muttered, his teeth nipping at her earlobe.
Her stomach convulsed with need. “Cash, I—”
He cut her off as his mouth consumed hers once again. She entwined her fingers in his hair because if she didn’t anchor them, they could end up anywhere. Cash didn’t merely kiss. He possessed. His hands burrowed beneath her shirt, and with a flick of his fingers, he unhooked her bra. But when his palm moulded to her breast, a wave of panic hit her. This was moving too fast. Way too fast.
Tearing her mouth from his, she gulped in as much air as she could handle. Her lungs burned, and she turned her head to the side as he made another move to kiss her. His thumbs brushed her nipples, his lips fastening onto her neck, and as a rush of wetness pooled between her legs, Tally knew she had approximately five seconds to call a halt to this. Otherwise, she wouldn’t be able to resist him.
“Please stop,” she whispered.
He paused. His lips were still touching her neck, although they’d stopped moving, and his breath was hot against her skin. He raised his head and cupped her face, his thumbs skimming across her burning cheeks. “I don’t want to stop.”
God, she didn’t want him to either. And he had to know it. Her heaving chest, short breaths, and damp skin would tell him that she was turned on, more turned on than she’d been in her whole life. Fighting the devil on her shoulder and the desire in her heart was exhausting.
When her lips parted, Cash lowered his head to capture her mouth once more, but if she let him touch her again, she was done for. Another notch on a bedpost that already had a serious case of hives.
“No!” She pushed the flat of her hand against his hard chest. He immediately stepped back. His eyes narrowed, and the soft, full lips that had been fixed to hers moments before were now pressed into a thin white slash.
He strode out of the kitchen, leaving her alone. Mortified, she refastened her bra and tucked in her shirt. When she’d recovered enough to follow him into the hallway, he was standing by a wide-open front door.
“Isaac will take you back to work.”
“What––”
“Just go, Natalia. And be thankful I’m not going to put in a formal complaint about how you got that story.”
Her throat tightened, and choking back a sob, she ran outside. 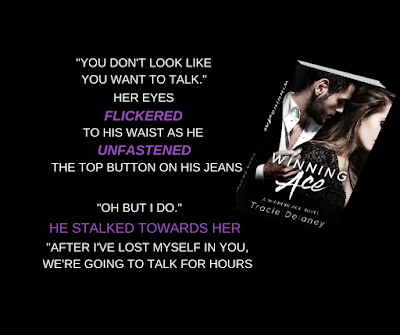 Tracie Delaney is the author of the Winning Ace trilogy. She loves nothing more than immersing herself in a good romance, although she sometimes, rather cheekily, makes her characters wait for their HEA.
When she isn’t writing or sitting around with her head stuck in a book, she can often be found watching The Walking Dead, Game of Thrones or any tennis match involving Roger Federer. Her greatest fear is running out of coffee.
Tracie studied accountancy, gaining her qualification in 2001. Her maths teacher would no doubt be stunned by this revelation considering Tracie could barely add two plus two at high school.
Tracie lives in the North West of England with her amazingly supportive husband. They both share a love of dogs, travel and wine.

Thank you so much for hosting me on your blog. I really appreciate the time you have taken to put the post together :-)